’SeaH2Land‘ is an ambitious vision, linking GW-scale electrolysis to the large industrial demand in the Dutch-Flemish North Sea Port cluster through an envisaged regional cross-border pipeline. The green electricity required to produce the renewable hydrogen is proposed to come from the build-out of additional large-scale offshore wind. The major industrial companies in the region ArcelorMittal, Yara, Dow Benelux, and Zeeland Refinery, support the development of the required regional infrastructure to enable sustainably-produced steel, ammonia, ethylene, and fuels in the future, helping the Netherlands and Belgium to accelerate their carbon reductions towards 2030 and beyond. 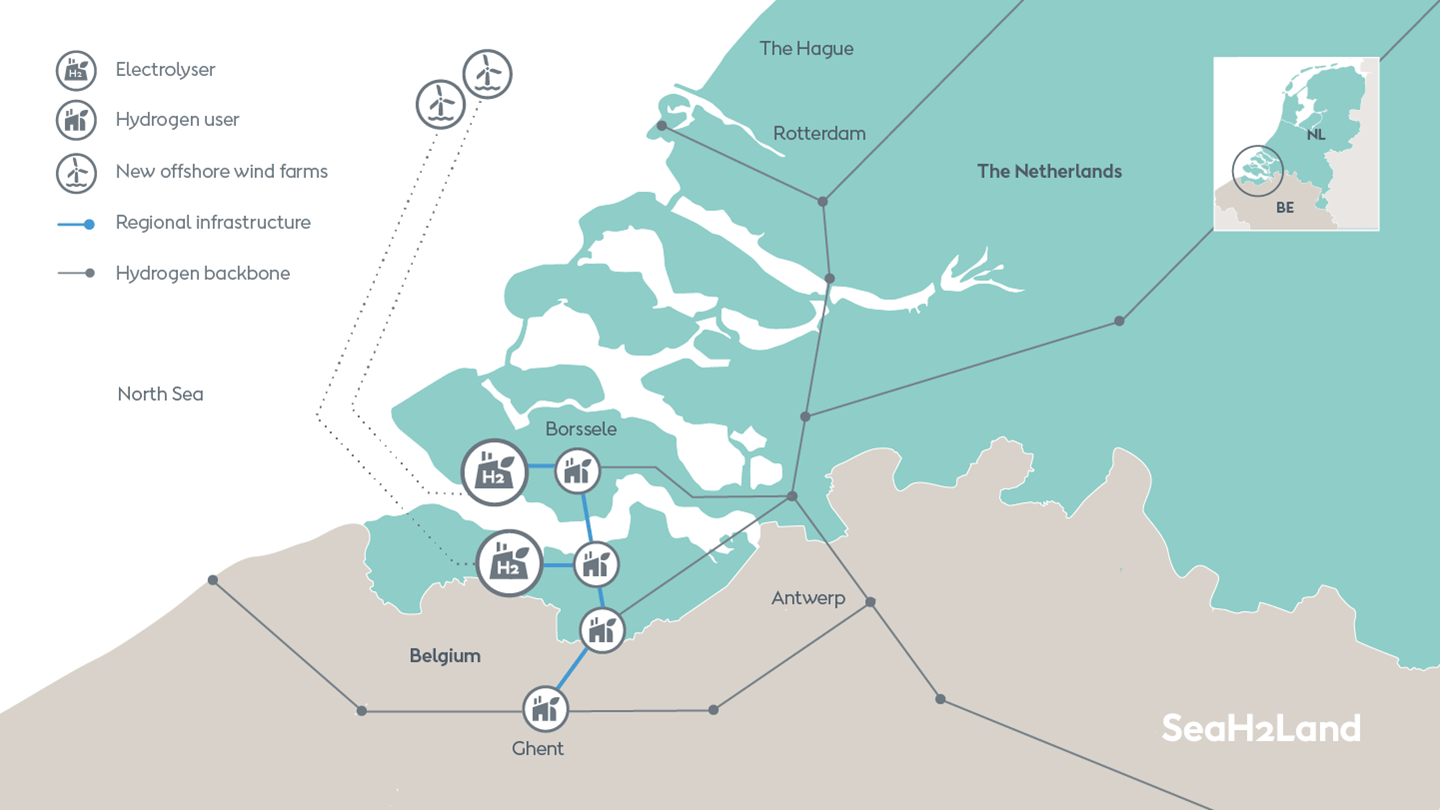 The SeaH2Land vision includes a renewable hydrogen production facility of 1 GW by 2030 to be developed by Ørsted. If realised, the electrolyser, which will produce the renewable hydrogen, can convert about 20 % of the current hydrogen consumption in the region to renewable hydrogen.
With 580,000 tonnes per year, the North Sea Port cluster is one of the largest production and demand centres of fossil hydrogen in Europe today. Driven by decarbonisation efforts, industrial demand in the cluster could grow to about 1,000,000 tonnes by 2050, equivalent to roughly 10 GW of electrolysis.

Regional infrastructure and hydrogen exchange between big industrial players
The industrial players in the region, united in the Smart Delta Resources (SDR) industry partnership, will continue the dialogue with TSOs for them to develop a regional open-access pipeline network of about 45 km, stretching across the North Sea Port area from Vlissingen-Oost (NL) to Gent (BE).

The GW electrolyser is proposed to link to the envisaged regional pipeline system connecting large-scale consumption and production in the cluster. Yara, in consortium with Ørsted, and Zeeland Refinery have each announced plans for mid-size renewable hydrogen production at their sites, while Dow has been exporting hydrogen to Yara since 2018 through the world’s first conversion of a gas pipeline into hydrogen. The network can be extended further south to ArcelorMittal as a short-term no-regret and further north, underneath the river Scheldt, to Zeeland Refinery, as a crucial link to create a unique regional ecosystem of hydrogen exchange with significant carbon reduction in the manufacturing processes of ammonia, chemicals, and steel and a significant contribution to the European Green Deal.

Moreover, the cluster strategy proposes to extend the 380 kV high-voltage network for the electrification needs of the industry south of the river Scheldt. This would enable GW-sized electrolysis and offshore wind landing zones on both sides of the river, turning the cluster into a true energy hub.

Phased build-out of electrolyser capacity
Subject to a regulatory framework being in place, the regional network will unlock the first phase of SeaH2Land, which comprises 500 MW of electrolyser capacity. The second phase of SeaH2Land which scales the electrolyser capacity to 1 GW will require the possibility to connect to a national hydrogen backbone, providing additional flexibility and storage. Several locations north and south of the river Scheldt have been identified for GW-scale electrolysis. In the meantime, several projects are being developed in the region on the sites of industrial players, such as Zeeland Refinery’s envisaged 150 MW electrolyser, which are also to be connected to the network.

Dialogue with regulatory authorities
The partnership will now move forward and engage in dialogue with the regulatory authorities on the framework and policies needed to support the development of renewable hydrogen linked to large-scale offshore wind, the regional infrastructure, and conduct a full feasibility study of the project. This ambition fits well with the Hydrogen Delta Programme for the region, developed by Smart Delta Resources – the association of industrial companies in the region – and supported by the Provinces of Zeeland and Oost-Vlaanderen.

Roles between partners
If realised as envisaged, Ørsted – the world leader in offshore wind – will develop the offshore wind farm and electrolyser. North Sea Port – the port stretching from Zeeland (NL) into Flanders (BE) – and Smart Delta Resources will take the lead in developing the regional infrastructure in close collaboration with the TSOs, supported by the provinces of Zeeland and Oost-Vlaanderen. The biggest industrial companies in the region, ArcelorMittal – the world’s largest steel producer outside China, Yara – the world’s leading ammonia producer, Dow – one of the biggest material science companies in the world, and Zeeland Refinery – owned by leading oil and gas companies and a co-supplier of low-carbon hydrogen to the network - will continue to take part in the hydrogen exchange in the industrial cluster. The industrial demand in the region will provide the offtake of renewable hydrogen when the right framework conditions and economics are in place.

Martin Neubert, Chief Commercial Officer and Deputy Group CEO, Ørsted, says:
“The Dutch-Flemish North Sea Port covers one of the largest hydrogen clusters in Europe. As the world looks to decarbonise, it’s paramount that we act now to secure the long-term competitiveness of European industry in a green economy. The SeaH2Land project outlines a clear vision and roadmap for large-scale renewable hydrogen linked to new offshore wind capacity. With the right framework in place, the Netherlands and Belgium can leverage the nearly unlimited power of offshore wind to significantly advance renewable hydrogen as a true European industrial success story.”

Michael Schlaug, Plant Manager, Yara Sluiskil, says:
“As one of the largest consumers of hydrogen, Yara welcomes visionary initiatives that can spur the development of a green hydrogen market in the Zeeland region.”

Manfred Van Vlierberghe, CEO, ArcelorMittal Belgium, says:
“ArcelorMittal Belgium maintains its leading role in the field of climate and the environment. We do this by focusing strongly on circularity, gradually replacing raw materials with resources based on waste streams and converting by-products into new raw materials. In addition, we also focus on using hydrogen, both in our existing processes and in novel technologies. Our ambition is to build a hydrogen pipeline between Dow in Terneuzen and ArcelorMittal in Ghent. We also aim to increase the use of green hydrogen, and for this our collaboration with Ørsted is an important step. Together with our partners in the Smart Delta Region, we will develop an ecosystem with a great complementarity of companies and knowledge centers.”

Anton van Beek, Chairman of the Board, Dow Benelux, says:
“A 380 kV connection to Zeeuws Vlaanderen will be critical to support large-scale direct electrification of Dow’s world-scale ethylene plants in Terneuzen.”

Daan Schalck, CEO, North Sea Port, says:
“North Sea Port welcomes the ambition of Ørsted to further develop the cross-border port as an important hydrogen cluster in Europe together with the big industrial companies in the region.”

Nathalie De Muynck, General Manager, Zeeland Refinery, says:
“Let us create together the critical mass to kickstart the H2 infrastructure, which is essential for the new H2 developments in the region.”

Steven Engels, General Manager Benelux, Ørsted, says:
“SeaH2Land will help the Netherlands to accelerate its offshore wind build-out and to work towards its ambition of 3-4 GW electrolyser capacity by 2030. SeaH2Land offers the Netherlands and Belgium an opportunity to get closer to realising its 2030 climate goals by reducing carbon emissions in the industrial sector. Governments can help this flagship project by putting in place a dedicated support mechanism and renewable hydrogen programme coupled to offshore wind. This should support the necessary industrial scaling to bring down the cost of renewable hydrogen.”